Note: Accommodations are not included in the Esprit registration fee.

Esprit will once again be held at the Red Lion Hotel on the waterfront in Port Angeles. Esprit has been held year after year since 1990 in this scenic location. The staff of the Red Lion as well as the merchants and residents of this community provide a warm and accepting atmosphere for the Esprit attendees! Get familiar with the Red Lion Hotel's layout by looking at the hotel floor plan. 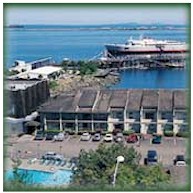 A view of the hotel as you approach on Highway 101. 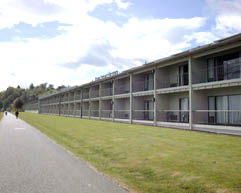 Each of the "waterfront" rooms overlooks a pleasant walking trail that runs along the shoreline. 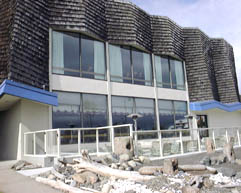 The outdoor patio where the cocktail parties are held. The lower level is the hotel's Crab House restaurant and the upper level is the Olympic and Juan de Fuca ballrooms/classrooms.

Esprit is always given highly favorable room rates available only to registered attendees. Rates (single/double occupancy, small charge for more occupants) through Esprit 2019 are as follows. You must call the hotel directly and press 0 to get the front desk for Esprit rates. Do not select the "reservations" option because that will take you to the national reservation number which does not offer these rates. Early reservations at the Port Angeles Red Lion are recommended. Check our social networking resources to make roommate or carpool connections with other attendees.

The Red Lion is governed by Washington smoking laws. Smoking on the balcony of a waterfront room is not allowed and you are subject to a fine added to your room cost.

There are several less expensive motels a few blocks away. Esprit is unable to make any specific recommendations. You can use mapping services such as http://maps.google.com or http://maps.yahoo.com and ask for hotels that are near the Red Lion or consult resources such as the Lodging/Hotels and Motels link at http://www.portangeles.org.